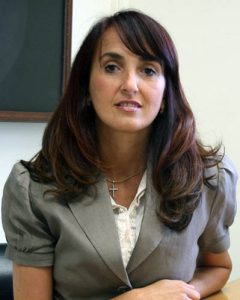 Carmen Asiaín Pereira serves as a senator in the Parliament of Uruguay. She received a doctorate in law and social sciences from the University of the Republic and is a professor of law and religion, graduate studies program, at the University of Montevideo and a professor of law and religion and of health law, graduate program, Facultad de Teología del Uruguay Monseñor Mariano Soler. As an attorney accredited by the National Ecclesiastical Court (Uruguay and Argentina) and a partner at the law firm of Pollak & Brum, she is a litigator in matrimonial canon law and advises and litigates cases involving freedom of conscience and religion or belief against the State.

The following is a translated summary of her remarks as a panelist addressing “Latin American Perspectives on Religious Freedom” at the First Brazilian Symposium on Freedom of Relief or Belief (2022). Panelists discussed religious freedom in the context of international human rights law, the inter-American system, national laws—how the freedom is enshrined with different nuances in the constitutions of Latin American countries—and related issues facing the region.

Recognition of the Right to Freedom of Conscience and Religion

The right to freedom of conscience and religion is recognized and protected in regional instruments—in addition to international instruments—subscribed to by almost all Latin American countries. The American Declaration of the Rights and Duties of Man of May 1948 preceded the Universal Declaration of Human Rights by a few months and enshrines the right both in its individual and collective dimensions, both in public and in private, based on the dignity of the human person. The American Convention on Human Rights of 1969, an instrument binding on countries that have ratified it, extends the substance of the right by recognizing not only the right to have and preserve a religion or beliefs and tochange, but also to profess and disseminate a religion, both individually and collectively, both in public and in private. For a restriction on the expression of such freedom to be legitimate, it must be established by law and aimed at preserving other fundamental rights of similar status. In developing the substance of freedom of association, the Convention also covers association for religious purposes, guaranteeing the right of groups to conduct themselves in accordance with their beliefs. Subsequent additional protocols adopted within the framework of the inter-American system focused on other aspects of the right to freedom of conscience and religion.

In a case concerning the film The Last Temptation of Christ (Olmedo Bustos v. Chile (5 February 2001)), the Inter-American Court of Human Rights found that the State had not violated religious freedom, but the Court explained that freedom of conscience and religion “is one of the foundations of democratic society. In its religious dimension, it constitutes a transcendental element in the protection of the convictions of believers and in their way of life.”

A survey of Latin American constitutions reveals that the vast majority include the invocatio dei (invocation of God) in their preambles, before laying out the law to give meaning to institutions. In contrast, Cuba’s constitution makes a socialist and Marxist-Leninist profession of faith, while others, such as those in Mexico and Uruguay (with a strong secularist imprint), simply omit the preamble.

Due to the leading role that the Catholic Church has had in the history, independence, and culture of Latin American countries generally, several constitutions mention the Catholic Church and recognize some form of privilege, without deferring or affecting equitable treatment for other religious entities.

Several constitutions contain specific provisions relating to the right, such as religious freedom in public education, in the case of Brazil and Colombia; economic support of religious groups through tax exemptions, as in Brazil, Chile, Argentina and Peru; civil effect to religious marriages, in the case of Colombia, Guatemala, Brazil, and the Dominican Republic; and protection of conscientious objection, as in Brazil, Colombia, and Paraguay—while Nicaragua and Venezuela deny it.

Some recent constitutions account for a new phenomenon called the “Latin American Neo-constitutionalism of the Twenty-First Century,” leading us to ponder if we are facing a new form of State neo-confessionalism. These include the constitutions of Bolivia, Ecuador, Venezuela, and Nicaragua, with their invocations to the Pacha Mama or Mother Earth.

The draft constitution that Chile is considering is the great unknown.

Analyzing the pending issues that Latin American countries face, the most basic “check-list” includes the need for freedom of conscience and religion laws conceived in modern terms and aligned to the standards of international human rights law—laws that contemplate issues such as freedom of conscience for workers, autonomy of religious entities, and institutional ideological freedom and its harmonization with academic freedom and the right of institutions to select suitable personnel for teaching or representing the institution. In those countries where the question of legal recognition of religious entities is not settled, it should be regulated. In mixed issues involving the State and religious groups, the best resolution is through the principle of bilaterality of normative sources, that is, resolving them through agreements between the State and each relevant religious group.

The major legislative challenges have been raised by the so-called “rights agenda,” through the introduction of issues sensitive to ethics and bioethics—and, therefore, to religious groups—in laws, such as the decriminalization of abortion, euthanasia, and the conscientious objection of those compelled to participate in practices.

Emergency situations that arose during the pandemic were addressed by a March 2021 ruling of the Constitutional Court of Chile, providing that a constitutional “state of emergency of catastrophe” empowers to restrict, not suspend, the exercise of constitutional guarantees. Limiting regulation may never affect the essence of such guarantees, nor conditions that prevent their exercise.

If it is true that rights are measured in their contours, then it is precisely the limiting situations that mark the insurmountable contours of rights: regulation can never affect their essence.