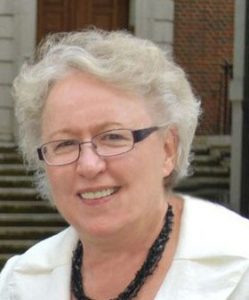 Donlu DeWitt Thayer retired on 1 January 2020 as Publications Director of the International Center for Law and Religion Studies at Brigham Young University’s J. Reuben Clark Law School. Now a Center Senior Fellow, she is a contributing editor and administrator of the ICRLS blog and International Law and Religion Headlines. Thayer is also an Associate Editor of the Oxford Journal of Law and Religion and is case table manager for the Strasbourg Consortium, which tracks the FoRB jurisprudence of the European Court of Human Rights.

Thayer holds a BA in English and French, an MA in American Literature, and a JD with concentration in family and international law. She has been a family, juvenile court, and victim/offender mediator; received specialized training in high-risk mediation; and was Executive Director of Community Dispute Resolution Services of Utah County. A professional writer and editor for more than fifty years, she also taught for many years composition, thesis, and creative writing in the BYU English Department and Honors Program, where she designed and taught the course Advanced Writing for Pre-Law Students.

Publications include editorial roles in Religion and the Secular State: National Reports (with Javier Martínez-Torrón and Cole Durham, General Reporters (2015)) and the Brill Encyclopedia of Law and Religion (associate editor with Gerhard Robbers and Cole Durham (5 vols. 2016)). Other publications include volumes in the ICLARS Series of Law and Religion: Law, Religion, Constitution (with Durham, Silvio Ferrari, and Cristiana Cianitto (2013)); Religion and Equality: Law in Conflict (with Durham (2016)); Religion, Pluralism, and Reconciling Difference (with Durham (2018)); and Law, Religion, and Freedom: Conceptualizing a Common Right (with Durham and Martínez-Torrón (2020)).

Talk About posts by Donlu Thayer: