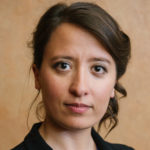 Elizaveta Gaufman is Assistant Professor of Russian Discourse and Politics at the University of Groningen, Netherlands

On the morning of May 8, 2018, anti-corruption activist Maria Motuznaya’s doorbell rang in Barnaul, Russia. Several police officers came in, searched her apartment, and confiscated her laptop. Among the images that she saved and posted on her Vkontakte social network page, there were several racist and antireligious memes that faulted Russian Orthodox priests for being businessmen and implied that the Church is one of two main challenges that Russia faces (bad roads was the other). Motuznaya faced accusations based on the infamous “extremist” article 282 of the Russian Criminal Code, as well as charges of “insulting religious feelings” from article 148. Even though the outcry about her case led to a partial decriminalization of article 282, which now limits charges to only those who post offensive content more than once a year, it is still important to take a closer look at the political reasoning behind the prosecution of affronted spirituality.

The concept of “offended religious feelings” in Russia came about in 2012 during and after the Pussy Riot case[1], where the bill of indictment featured not only “punk prayers” in several cathedrals asking Godmother to chase Putin away but also references reaching back to guidelines from the Council of Laodicea (4th century CE) and the Quinisext Council (7th century CE). The case revitalized accusations of blasphemy and in the end also led to reconsideration of what acts are (un)acceptable in Russian society as a cultural entity, as well as what constitutes Russia’s “spiritual bonds,” or the moral values that hold Russian society together. Controversy around the staging of Wagner’s opera, Tannhäuser, in Novosibirsk in early 2015 proved that, even despite Russian mass media’s fixation on the Ukrainian crisis, blasphemy as a threat to Russian polity remains a hot topic since the Pussy Riot trial.

Considering the emphasis that Russian authorities place on the multicultural and multireligious nature of the country, blasphemy must be more than solely an un-Christian act, although many right-wing organizations would argue that a true Russian is also an Orthodox Christian. Within this context of stated pluralism, blasphemy denotes the broader sense of questioning established societal norms. One key factor contributing to the Pussy Riot prosecution was that the offenders were women—defying the newly established conservative turn of the Russian government as well as the official stance of the Russian Orthodox Church that “a woman should be focused inwards, towards her children” and that her failure to do so could lead to the destruction of families and even the “motherland.” Reactions from the government and the Orthodox Church, as its symphonic counterpart, painted members of Pussy Riot as symbols of an antigovernment, anti-Church stand and further proved just how sensitive the government and Church are to diverging views on Russian identity. The court case predictably focused on the alleged anticlerical message of the activists rather than the risk to established cultural norms, which lead to the criminalization of “public actions expressing a clear disrespect for society and committed to offend the religious feelings of believers” in 2013.

Like the court, government and Church officials unsurprisingly chose to ignore messages in the punk prayer that were critical of Putin and the church of majority. Instead, Vladimir Putin, commenting on the Pussy Riot group in October 2012, said that “one cannot undermine the foundations of morality, and destroy the country.” At a different press conference Vladimir Putin expressed regret for the fact that Pussy Riot participants “reached the state when they became shocking, degraded women.” Other members of the establishment were much more judgmental, who claimed Pussy Riot threatened regime stability and even human security, as seen in this statement by parliamentarian Nilov:

2012 showed a number of outrageous, blasphemous, horrible, devilish situations and events. We are all sick with the well-known story about “Pussy Riot.” All this time there have been cases of desecration of icons in different cities in different regions of our country, swastikas, satanic symbols, various inscriptions in churches and synagogues. There were two high-profile terrorist attacks in Tatarstan and Dagestan that killed and injured people, the spiritual leaders of the Muslims […]

Dear deputies, this is incitement to religious hatred. All this is destructive, provocative, aimed at destabilizing the situation and inciting hatred in our society.

Nilov also made a connection between spiritual and physical security, i.e., in his speech he emphasized that attacks on religion usually correlate with murder. He connected the “incitement to religious hatred” to the “destabilization of the situation” in the whole country, making it clear that Pussy Riot was symptomatic of a larger threat to Russia. Mentioning swastikas and satanic symbols contributed to framing Pussy Riot and other “blasphemous acts” as a threat akin to fascism.

The head of the Russian Orthodox Church Patriarch Kirill was also quite vocal about the fact that the Pussy Riot punk prayer posed an existential threat to Russia. The concluding statement of the “Ecumenical Russian People’s Council” of 2012, whose president is Patriarch Kirill, discussed geopolitical danger to the “sovereignty of the humanitarian space—the space of sense, spiritual symbols, social-cultural development” that must be “protected from defamation” through defending fundamental spiritual values.

Societal backlash to the Pussy Riot case showed that existential threat narratives in Russia revolve not only around geopolitical rivalry but also post-Soviet self-identity issues. With the government trying to establish the so-called “sovereign morality,”[2] which has replaced “sovereign democracy,” there is a certain “social request for a moral code” among the Russian population. According to Levada polls, less than 8% of the Russian population approved of the punk prayer and most were quite on board with the Russian government’s new moralizing stance in order to consolidate legitimacy based on conservative values. Consequently, the debate around the Pussy Riot case has caused wide-ranging ramifications for both case law and the political agenda.

The Motuznaya case highlights how articles 282 and 148 of the Russian Criminal Code can lead to selective prosecution. When an example of extremism is a meme that compares a religious procession with poor roads, clearly the flawed definitions in the law leave much to be desired. As many observers argued, the main problem here that extremism in Russian law is not tied to the notion of violence, like it is tied in several international documents, such as the OSCE/ODIHR Freedom of Religion of Belief and Security Policy Guidance. Moreover, the vague meaning of “religious feelings” only leads to criminalizing religious discourse, instead of the nobler goal of protecting religious minority groups that, conversely, end up in prison.

[2] Gulnaz Sharafutdinova, ‘The Pussy Riot affair and Putin’s démarche from sovereign democracy to sovereign morality’, The Journal of Nationalism and Ethnicity 42:4 (2014), 615-621.