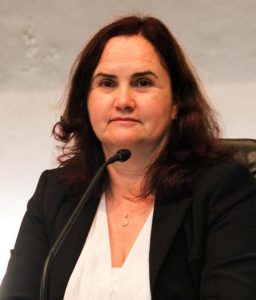 Edna Vasconcelos Zilli graduated in law from Pontifícia Catholic University of Paraná. She is a specialist in environmental law and third sector law (Positivo University) and constitutional law and religious freedom (Mackenzie University). Zilli is president of ANAJURE (National Association of Evangelical Jurists), founding member of the Commission on Law and Religious Freedom of OAB/PR (Parana Order of Attorneys), and a member of the OAB/PR Commission on Third Sector Law.

The following is a translated summary of her remarks as a panelist addressing “Religious Freedom, Coexistence, and Justice” at the First Brazilian Symposium on Freedom of Religion or Belief (2022).

In discussing religious coexistence in Brazil, data generated by the National Human Rights Ombudsman (Ouvidoria Nacional de Direitos Humanos) offers a starting point for understanding the bigger picture. In the last three years, for example, the agency received complaints about religious intolerance in different parts of the country. In the first half of 2020 they received 342 complaints; from the second half of 2020 to the second half of 2021, there were 823 cases; and in 2022 to date, there have been 111 occurrences. In these periods, five states produced the most complaints: São Paulo, Rio de Janeiro, Minas Gerais, Bahia, and Rio Grande do Sul. Rankings follow the sequence listed, except for the second half of 2020 to the end of 2021, when Rio de Janeiro was in first place and the State of São Paulo was in second.

The press has reported on the nature of some of these religious liberty violations. The following are just a few examples from more recent cases. In 2021, tenants in the Barra da Tijuca condominium, in Rio de Janeiro, were surprised by the distribution of anti-Semitic pamphlets. In the same year, a mosque in Ponta Grossa/PR and Candomblé grounds (terreiro de Candomblé) in Rio de Janeiro suffered attacks where sacred objects were desecrated. In early 2022, a man invaded an evangelical church in Tauá/CE and damaged decorative objects and electronic equipment.

Another source of information about cases related to religious freedom is the ANAJURE Observatory of Fundamental Civil Liberties (Observatório ANAJURE das Liberdades Civis Fundamentais). The Observatory registered approximately sixty complaints related to religious liberties and other human rights in the last two years. During the pandemic, some cases brought to the Observatory related to the interruption of virtual transmission of religious ceremonies and the application of stricter health restrictions to religious institutions than to other sectors. These examples demonstrate the need to reflect on measures that could be adopted, both by religious community and by public authorities, so that people of different creeds can peacefully coexist.

As for initiatives that can be taken by religious organizations, one is the promotion of internal dialogue on tolerance and respect for others. The organizations themselves, based on their precepts of faith, can encourage the practice of acts of respect and charity for the benefit of others.

It is also important for these entities to reflect on how they might avoid conflicts that could arise in the midst of coexistence. An example relates to noise emissions. Religious communities should consult local legislatures about this issue and adopt adequate sound insulation, to avoid disturbing others’ peace and quiet during religious ceremonies. To avoid conflicts, these entities can also reinforce with their members guidelines on the use of parking spaces near the temple, thus preventing parked cars in restricted areas.

Peaceful Coexistence: The Role of Public Authorities and Others

Along with proposing such initiatives for religious entities, it is also important to outline possible ways in which public authorities can act to promote peaceful coexistence with religions.

One tool is inter-religious debate, which consists of promoting fora in which public authorities encourage reflection on tolerance between different religious branches. Greater tolerance and openness allow for the manifestation of different types of worship. A practical example is the Inter-religious Forum for a Culture of Peace and Liberty of Belief (Fórum Inter-Religioso para uma Cultura de Paz e Liberdade de Crença) that is being coordinated by the Secretary of Justice and citizens of the State of São Paulo. The forum includes individuals nominated by various religious organizations, as well as members of the state government, public ministry (Ministério Público), public defender’s offices (Defensoria Pública Estadual), universities, and nongovernmental organizations.

A second instrument capable of promoting peaceful coexistence between religions is transparency. Indeed, it is important that public authorities seek to increase transparency related to data about religious freedom violations, especially where criminal investigations are involved. This is because the rate of resolution for crimes of religious intolerance can be an effective indicator of authorities’ commitment to combatting such violations.

Furthermore, the importance of a network for complaints must be considered. A joint effort to expand the network of Police Stations of Racial Crimes and Crimes of Intolerance (Delegacias de Crimes Raciais e Delitos de Intolerância (DECRADI)) would further strengthen the functioning of networks that already exist. In this context, it is also necessary to train civil servants specifically to assist victims of religious freedom violations.

Thoughts on Law, Religion, and Society