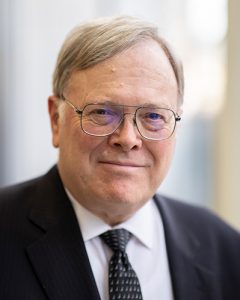 W. Cole Durham, Jr., retired in August 2019 as Susa Young Gates University Professor of Law at Brigham Young University, is Founding Director of the BYU Law School’s International Center for Law and Religion Studies. From its official organization on January 1, 2000, until May 1, 2016, Professor Durham was Director of the Center, which was organized to provide an institutional base for long-term initiatives in the field of law and religion throughout the world, begun in the Law School in the mid-1980s by Professor Durham and continued in subsequent years with the involvement of many students and colleagues.

Professor Durham holds am AB degree in Philosophy magna cum laude from Harvard College, and he joined the faculty at BYU Law School in 1976, just one year after he received his own juris doctor degree from Harvard Law School, where he was a Note Editor of the Harvard Law Review and Managing Editor of the Harvard International Law Journal. Throughout his long career he has been heavily involved in comparative law scholarship, with a special emphasis on comparative constitutional law. From September 2011 through September 2016 he was President of the International Consortium for Law and Religion Studies (ICLARS), based in Milan, Italy. He a founder and co-Editor-in-Chief of the Oxford Journal of Law and Religion. From 1989 to 1994, he served as the Secretary of the American Society of Comparative Law, and he is an Associate Member of the International Academy of Comparative Law in Paris—the premier academic organization at the global level in comparative law. He served as a General Rapporteur for the topic “Religion and the Secular State” at the 18th International Congress of Comparative Law held in July 2010. He has also served in earlier years as Chair both of the Comparative Law Section and the Law and Religion Section of the American Association of Law Schools.

Professor Durham has taught at the Brigham Young University Law School since 1976, and he was awarded the honorary designation of University Professor there in the fall of 1999. Since 1994, he has also been a Recurring Visiting Professor of Law at Central European University in Budapest, where he teaches comparative constitutional law to students from throughout Eastern Europe, and increasingly from Asia and Africa as well. He has also been a guest professor in Gutenberg University in Mainz, Germany and at the University of Vienna. In January 2009 he was awarded the International First Freedom Award by the First Freedom Center in Richmond, Virginia, and in July 2013 he received an honorary doctorate by Ovidius University in Constanţa, Romania.

Professor Durham has been involved in constitutional drafting projects in Nepal (2011 and 2009), Thailand (2007), and Iraq (2005-06). He has worked on constitutional and statutory drafting projects throughout Eastern Europe and in most former Soviet bloc countries. He has been particularly active in matters involving relations between religion and the state, though he also has extensive experience with comparative criminal law and non-profit law. He served from 1997-2013 as a member of the Advisory Council on Freedom of Religion or Belief of the OSCE’s Office of Democratic Institutions and Human Rights. He is a Vice President of the International Academy for Freedom of Religion and Belief and serves as a board member of church-state centers at DePaul and Baylor Universities, of the International Religious Liberty Association, and of the International Advisory Board of the Oslo Coalition on Freedom of Religion or Belief. He has also been active in work on laws governing the civil society sector, having served as Chairman of the Board of the International Center for Not-for-Profit Law in Washington, D.C. (and as a member of its board for many years).

Durham co-author with Brett Scharffs of Religion and the Law: National, International and Comparative Perspectives (Aspen/Wolters Kluwer 2010, second edition forthcoming), and with William Bassett and Robert Smith of Religious Organizations of the Law, an annually updated treatise published by Thompson Reuters/West. He is the editor (with Noel Reynolds) of Religious Liberty in Western Thought, and (with Silvio Ferrari) Law and Religion in Post-Communist Europe. He is also co-editor of numerous other publications, including Facilitating Freedom of Religion or Belief: A Deskbook, published in 2004 by Brill under the Martinus Nijhoff imprint; Religious Organizations in the United States, published in 2006 by Carolina Academic Press; two volumes of the Islam in Europe series (2012); the volume Law, Religion, Constitution: Freedom of Religion, Equal Treatment, and the Law (2013) with Ashgate, as well as three volumes (2016, 2018, and forthcoming 2019) in the Routledge ICLARS Law and Religion Series, and the Brill Encyclopedia of Law and Religion (2016). He was General Rapporteur, with Javier Martínez-Torrón, for the topic Religion and the Secular State for the 18th World Congress of the International Academy of Comparative Law (Washington, D.C., July 2010), published in final form by Complutense University of Madrid (2015).

He has authored numerous law review articles dealing with religious liberty and other comparative law themes.

Professor Durham has testified before the U.S. Congress in hearings on religious intolerance in Europe and on the Religious Liberty Protection Act. In 2010 he testified via teleconference before the Indonesia Constitutional Court concerning the constitutionality of the Indonesian blasphemy law.

Talk About posts by Cole Durham: