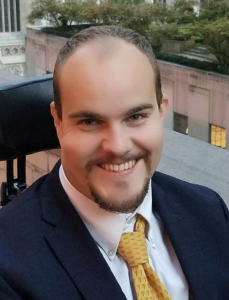 Matthew Cavedon is a criminal defense attorney in Gainesville, GA

Moving the world onto Zoom was not as dramatic a break from history as you might think. After all, it’s been 170 years since Marx & Engels wrote that “[a]ll that is solid melts into air.” In many ways, then, moving everything onto actual Wi-Fi is just another blip in a centuries-long trend of airier and airier “modernization”—that is, of more abstraction, of the move away from place and flesh and time into a new world of idea and identity and the instant. Why, then, does it feel so sad? Americans are not handling the COVID-19 pandemic well. A third of us are experiencing stress and anxiety. Why? Shouldn’t we be ready for this next stage of human evolution, away from conference rooms and handshakes and hugs? For at least twenty years, some say, we have all been “chimeras, theorized and fabricated hybrids of machine and organism—in short, cyborgs.” And yet we don’t seem to have assimilated very well.

Two sanctuaries of resistance to the technology trend—the courtroom and the Catholic Church—help explain why we can’t just effortlessly float off into the cloud as a species. Both have only grudgingly gone online in recent months, even as much of the business world breathlessly predicts that couches are the new offices. This is because both are expert in focusing attention. And that requires forming consciousness through the senses in ways that virtual reality does not allow.

Litigation and liturgy have much in common. Both demand rapt attention. And both recognize that that cannot be achieved without engaging the body. Consider a trial. One of the most famous in English history was Sir Walter Raleigh’s for treason in 1603. As recounted centuries later by Justice Antonin Scalia, much of the evidence was abstract: it was a bunch of words. Raleigh’s supposed accomplice had given evidence against him before a government tribunal and written damningly about him in a letter. Records of both were presented to the jury, but the accomplice himself did not appear. Raleigh’s defense was simple. He demanded that his accuser “be here, let him speak . . . Call my accuser before my face.” He wanted the jury to be able to compare the accomplice’s words with his body language and see if he would squirm when attention was on him in the hot seat.

Thus ran the first major controversy over a defendant’s right to confront the witnesses against him, a right eventually enshrined in the Sixth Amendment to the U.S. Constitution. It is so important that fifty years ago, the U.S. Supreme Court even contemplated binding and gagging an unruly defendant, just so that he could be in the same room as everyone else for his trial.

The confrontation right focuses on the importance of a jury viewing a witness’s body and a witness being within physical sight of a defendant. The idea is that physical presence focuses attention in ways that can affect words and perceptions. But that is not the only way that corporeality matters in the courtroom. The law is also scrupulous about ensuring that jurors can be attentive to a defendant as more than just an abstract subject of words. A classic precedent in this vein is the 1960s U.S. Supreme Court case Rideau v. Louisiana. There, a murder suspect was interrogated on video camera, and the recording was broadcast three times on local television. Within a week, perhaps two out of every three residents of the parish had tuned in. The U.S. Supreme Court reversed the defendant’s conviction, finding that the trial should have been moved elsewhere. “For anyone who has ever watched television the conclusion cannot be avoided that this spectacle, to the tens of thousands of people who saw and heard it, in a very real sense was [the] trial.”

The issue wasn’t the amount of attention the viewers gave. It was the kind. The defendant was turned into a spectacle, with he and his words reduced into mere abstractions piping in through a television. Indeed, the sort of attention we give to abstract images and sound bites, even of people, is qualitatively different from what we give to flesh and blood sharing the room with us. Consider an episode in George Orwell’s Nineteen Eighty-Four: the Two Minutes Hate. Everyone sits in front of a giant television showing the face of an infamous enemy of the state. Audience members begin to hiss and jeer. As the program mashes propagandistic images together with verbal denunciations, the room reaches a fever pitch. Soon, people even fling objects at the screen.

Orwell knew that the kind of attention given to technologically abstracted pictures and voices is not the same as what we afford to an actual, present person. No wonder Chief Justice Earl Warren wrote that

the courtroom in Anglo-American jurisprudence is more than a location with seats for a judge, jury, witnesses, defendant, prosecutor, defense counsel and public observers; the setting that the courtroom provides is itself an important element in the constitutional conception of trial, contributing a dignity essential to the integrity of the trial process.

This might seem quaint. Was he also going to find a constitutional right to be tried in a room paneled with mahogany? But then again, surely it mattered that a cat pranced behind a juror in America’s first Zoom criminal trial in August, and that a member of the jury pool had to be warned by the judge to stop looking off at another screen. The bodies of those involved were in their own homes and apart from each other, so attentions wandered. Besides, could the jurors really have seen and heard the defendant and witnesses in the same way on two-dimensional screens as they would have had they been in the same room? Courts have resisted total digitalization because of deep instincts about the ways that situating people together affects what is said, seen, and heard. Environs shape words and perceptions.

Courts are not the only solemn institutions that recognize this. The Catholic Church has conceded little to technology in dealing with mandated church closures and limits on attendance. The Church is not Luddite. Eleven million people watched Pope Francis’s pandemic prayer service in March, and the Vatican’s Holy Week broadcasts drew nearly four times as many viewers as they did in 2019. But, even as a third of American adults are viewing religious services online, the Church is insisting that online Mass is “no substitute for the real thing.”

How come? The most important reason is theological: Catholics believe that the Eucharistic bread and wine become the literal Body and Blood of Christ, and that believers ought to “be nourished at the table.” Unlike some Christian communities that focus more exclusively on preaching or social justice, the Catholic Church teaches that “the aim and object” of its work is that the faithful “come together to praise God in the midst of His Church, to take part in the sacrifice, and to eat the Lord’s supper.”

But this dogma is only part of the story. After all, Catholics can receive Communion at home if they are sick or homebound. Why not simply consider everyone homebound for now and set up a Eucharistic DoorDash? The reasons are similar to those affecting the courts. “Mother Church earnestly desires that all the faithful should be led to . . . fully conscious, and active participation in liturgical celebrations . . . .” Fully attentive worship, in turn, requires engaging the body and its senses in order to enhance what the rational mind can give. Hence one liturgical rubric joins together “our participation in the eucharist” with “an attitude of prayer and attention, physical movement, sentiments of praise and adoration, and joining in . . . sung and recited responses.” This guide specifically warns that broadcasting the liturgy risks giving viewers “more passive roles as spectators,” instead of making them properly attentive.

What makes physical presence so irreplaceable in court and church alike? The realities of being human. It is tempting to see humans as primarily rational creatures, able to process ideas and words just as well when we’re naked in our beds as when we’re gussied up in business casual sitting at a desk. But we’re not just thought computers. As Aristotle and his followers have taught, we’re rational animals. We have bodies. We perceive with more than just our bare minds. This was also the analysis of modern philosopher Maurice Merleau-Ponty. Our senses—and so, our bodies— shape our consciousness. And our bodies exist in specific spaces and times. That means our attention, our rationality, all our delightfully abstract logic, is still tethered to and affected by where our bodies are.

Courts and the Catholic Church still expect you to show up. Both aim to hold high attention. And both understand that this depends on fleshier aspects of who, when, where, and with whom we are.