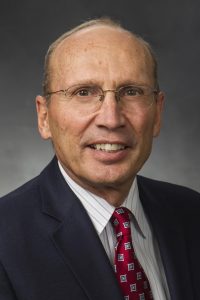 In South Bay United Pentecostal Church v. Newsom, the Court considered a church’s claim for emergency relief from the California governor’s state-wide order that places of worship limit attendance to a maximum of 100 worshippers or 25% of their building’s capacity. The Court refused relief; as Chief Justice Roberts explained, the order complied with the nondiscrimination rule of Smith and Lukumi by applying similar restrictions to many secular activities that also involve large groups in close proximity for extended periods, such as concerts, movie showings, theatrical performances, and spectator sports. Three Justices dissented, noting that the order did not apply to factories, offices, supermarkets, and other locations that, they claimed, present the same risk of transmission as group worship. “[W]hy can someone safely walk down a grocery store aisle but not a pew?” they asked.

Not quite two months later, the Court considered a similar request for preliminary relief in Calvary Chapel Dayton Valley v. Sisolak, a challenge to the order of the Nevada governor generally prohibiting gatherings of more than 50 people, including religious worship services, but permitting some businesses to operate with larger numbers so long as they did not exceed 50% of their buildings’ capacity. The majority again denied relief, with the three South Bay Pentecostal dissenters also dissenting here; they again noted the many facilities permitted to operate at 50% capacity, such as bowling alleys, gyms, breweries, and (most outrageously to them) casinos. The casino and other exceptions, argued the dissenters, “blatantly discriminate against houses of worship.”

Finally, on the eve of Thanksgiving, the Court seemed to change course—the expected consequence of Justice Ginsburg’s replacement by Justice Barrett, who is widely thought to be more sympathetic to religious exemptions. In Roman Catholic Diocese of Brooklyn v. Cuomo, the Court granted emergency relief to Catholic and Jewish congregations in New York City restricted to as few as 10 worshippers at a time. The governor’s order restricted many secular activities to the same or a greater extent, but the Court applied strict scrutiny despite the absence of religious targeting, finding that the order intruded far more severely on religious worship than necessary to control the transmission of the virus.

These decisions illustrate an important disagreement about the application of the anti-targeting rule of Smith and Lukumi. Many religious accommodationists argue that if a law contains any secular exemptions from its application, Smith and Lukumi constitutionally mandate the exemption of religious activities as well—a kind of “most favored nation” status for religion, as Professor Laycock put it (see The Remnants of Free Exercise, pp. 49-50). Justice Kavanagh expressly took this position in Roman Catholic Diocese: “once a State creates a favored class of businesses . . . , the State must justify why houses of worship are excluded from that favored class.”

Others argue that Smith and Lukumi only require that a law not single out believers and religious organizations for burdens borne by no one else. This was the situation confronted by the Court in Lukumi itself: the city’s purported “animal-protection” ordinance banning animal sacrifice and other killings exempted virtually every way of killing animals except the ritual sacrifices performed by the unpopular Santeria sect. Lukumi nowhere states that a law is subject to strict scrutiny if it has any secular exceptions that do not apply to religion, but only that religion may not be targeted for burdens applied to no one else. Once it is determined that a law has not singled out religion for imposition of a distinct disadvantage, it is argued, the remainder of the law should be subject to minimal judicial scrutiny.

There are at least two reasons why the second, deferential approach to burdens on religion might be preferred. First, the Court follows it in other areas of constitutional law. For example, once the Court determines that a restrictive abortion regulation does not constitute an “undue burden” on a woman’s fundamental right to terminate her pregnancy—that is, it does not place a “substantial obstacle” in the way of her right to choose—the regulation is thereafter subject to only minimal “rational basis” scrutiny, under which a law is presumed constitutional so long as there is some conceivable connection between the law and a legitimate goal. Likewise, in U.S. freedom of speech jurisprudence, once a court decides that a law does not regulate speech based on the viewpoint of the speaker or the content of her message, the law is subject to deferential “time, place, and manner” review.

Second, and perhaps more importantly, mandating religious exemptions when any secular exemption exists—the “most favored nation” status urged by Justice Kavanagh—would constitutionally mandate religious exemptions to virtually every government law, regulation, and order. Most laws do not apply literally to everyone; some exempt certain kinds of behavior or limit their scope for a variety of legitimate reasons. For example, the prohibition of racial and sex discrimination in public accommodations contained in the famous U.S. Civil Rights Act of 1964 exempts private clubs; the contraception mandate of the more recent Affordable Care Act does not apply to employers with less than 50 employees. But both laws equally apply to commercial businesses whether they are owned by believers or unbelievers; neither singles out religious owners of commercial businesses for special burdens imposed on no one else. To constitutionally mandate religious exemptions from laws like this would invest believers with special privileges, not equal rights; as Justice Scalia warned in Smith, religious exemptions from general laws place believers beyond the law, as a “law unto themselves.”

An Intermediate Position in COVID-Related Cases?

The Court in South Bay Pentecostal and Calvary Chapel seemed to have taken an intermediate position between these two doctrinal poles, As Chief Justice Roberts explained in the former case,

Although California’s guidelines place restrictions on places of worship . . . [s]imilar or more severe restrictions apply to comparable secular gatherings, including lectures, concerts, movie showings, spectator sports, and theatrical performances, where large groups of people gather in close proximity for extended periods of time. And the Order exempts or treats more leniently only dissimilar activities, such as operating grocery stores, banks, and laundromats, in which people neither congregate in large groups nor remain in close proximity for extended periods.

He went on to observe that, in the midst of a life-threatening pandemic, courts should not be questioning the decisions of elected officials and public health experts about the relative risks of contagion presented by different kinds of activities:

The precise question of when restrictions on particular social activities should be lifted during the pandemic is a dynamic and fact-intensive matter subject to reasonable disagreement [and thus] not subject to second-guessing by an unelected federal judiciary which lacks the background, competence, and expertise to assess public health . . . . (Internal quotation marks deleted.)

Calvary Chapel is defensible in the same way. The Nevada governor’s 50-person restriction on worship services also applied to movie theatres, lectures, museums, nightclubs, concerts, and other “gatherings of more than fifty people in any indoor or outdoor setting.” It did not target religion with singular burdens from which everyone else is excused. A few other activities are exempted, notably and notoriously casinos, but this does not make the order religiously discriminatory. As the district court’s opinion reasoned, though some secular activities were subject to more lenient restrictions, the application of more stringent restrictions to numerous secular activities as well as religious worship precluded a finding that they are “an implicit or explicit attempt to specifically target places of worship.” Thus, the question of whether “a church is more like a casino or more like a concert or lecture hall” in controlling the spread of the virus is the very sort of decision that should be left to elected officials and the experts who advise them.

Roman Catholic Diocese seemed to break from this analysis. Though secular activities involving indoor gatherings were subject to the same or more restrictive regulations, indicating the absence of religious targeting, the Court nonetheless applied strict rather than deferential scrutiny. Unlike the majorities in South Bay Pentecostal and Calvary Chapel, the Court in Roman Catholic Diocese declined to defer to the pandemic measures devised by the state’s health experts and elected officials.

Yet, closer examination suggests that Roman Catholic Diocese is consistent with the analysis deployed in the earlier cases. Even if one ignores suggestions of a religiously discriminatory motive, as the Court did, limiting congregations to a handful of worshippers makes little sense when they normally accommodate hundreds of people in their services. As the Court observed, “It is hard to believe that admitting more than 10 people to a 1,000-seat church or 400-seat synagogue would create a more serious health risk than the many other activities that the State allows.” The Court suggests here that deference is not called for when an otherwise legitimate health measure is so dramatically excessive.

The Court may yet clarify whether it has adopted the “most favored nation” analysis or merely refined the intermediate analysis of South Bay Pentecostal and Calvary Chapel. In Danville Christian Academy v. Beshear, a religious school is currently seeking emergency relief from an order closing all K-12 schools in the state, while allowing business offices, colleges and universities, and some retail businesses to operate. The order treats private religious schools exactly the same as all other K-12 schools, public as well as private, secular as well as religious. Since the order does not target religious K-12 schools’ special burdens, the Court should defer to the judgments of elected officials and health experts that these other activities are dissimilar to K-12 education, so long as some rational basis for dissimilar treatment is evident. Here the state might reasonably have thought that adults are more likely to conform to social distancing requirements than children, that distancing is more likely in business offices than in K-12 schools, and that the risks of viral transmission are less in retail businesses, where people do not gather for extended periods, than in K-12 classrooms, where they do (see Brief of Amici Curiae Church-State Scholars, pp. 5-14).

Is the Court really prepared to insist, in the midst of a life-threatening pandemic, that state experts and officials treat religious school children identically to college students and office employees? That they may not distinguish kindergartners from retail customers? That the Court knows best how to assess the risk of transmission posed by each of the innumerable activities present in American life?

Perhaps Justice Barrett has shifted the Court in this direction, though one may hope not: this sort of activist second-guessing would undermine democracy and the rule of law.