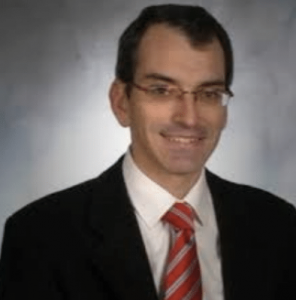 Alejandro González-Varas is Professor of Public Law in the School of Law of the University of Zaragoza, Spain

Coronavirus has arrived to Europe so suddenly than in the other places in the world. The European Union had to take quick measures in order to avoid the spread of the virus across the continent. The European Union has tried to support national health systems and counter the socio-economic impact of the pandemic at both national and EU level. It has fostered different measures in many fields, such as Economics, public health, or borders. It supplies updated information in the web about Overview of the Commission’s response. 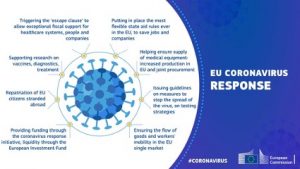 Measures regarding religious freedom in the UE and USA

More than half of the EU’s Member States have proclaimed a state of emergency. All Member States have closed (totally or partially) schools and introduced border/travel restrictions, and have prohibited public gatherings (included religious ones). Only a few countries—such as Bulgaria—did not propose the closure of churches and other places of worship. In other cases, like in Austria, not only religious ceremonies were avoided, but also the access to jails, hospitals, or nursing homes.

In the American case, there have also been some differences between States that have not allowed exemptions to the general rule of forbidding assemblies (included religious gatherings), and those ones that have permitted religious assemblies if they observe the social distance, number limitations and further. Moreover, a Pew Research Center survey (on 7th August 2020) finds that U.S. adults say houses of worship should be required to follow the same rules about social distancing and large gatherings as other organizations or businesses in their local area.

Comparison between the situation of the European Union and the United States in April 2020: 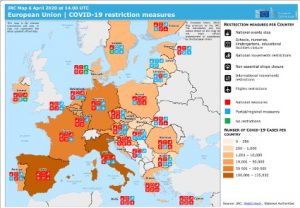 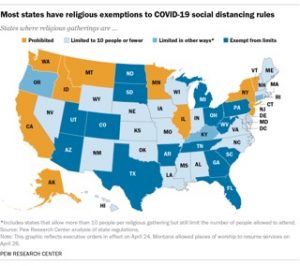 Even though the way back to normality will be long, it is also clear that the extraordinary confinement measures cannot last indefinitely. As a result, at their meeting on 26 March 2020, the Members of the European Council decided to go on working to limit the spread of the virus with measures similar to the already forenamed. As a result, the President of the Commission and the President of the European Council signed a Joint European Roadmaptowards lifting COVID-19 containment measures, on 15thApril. It states that constant dialogue with social partners will be key. I think that includes the dialogue with the religious denominations, as it is laid in article 17 of the Treaty on the Functioning of the European Unionand further guidelineson its interpretation. Anyway, the Roadmap says (§ 7) that, in this process of relaxing the confinement, “gatherings of people should be progressively permitted”. The document refers to various types of meetings such as commercial activities, concerts, restaurants, or those ones held in schools. However, it does not speak at any time about religious celebrations. 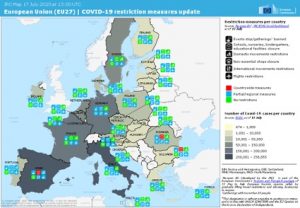 It is true that the European Union has warned that the measures adopted always have to be respectful to fundamental rights. However, it is difficult to find specific references to religious freedom or the celebration of acts of worship. Unlike the UE context, the Council of Europe does make concrete mentions. We can evidence it in the document Respecting democracy, rule of law and human rights in the framework of the COVID-19 sanitary crisis, on 7th April. It is held in § 3.3 that “The significant restrictions to usual social activities, including access to public places of worship, public gatherings and wedding and funeral ceremonies, may inevitably lead to arguable complaints […]. It is for the authorities to ensure that any such restriction […] is clearly established by law, in compliance with relevant constitutional guarantees and proportionate to the aim it pursues”. Here we have a text that matches USCIRF’s advices in case of taking measures to protect public health even in times of crisis included in The Global response to the Coronavirus: Impact on Religious Practice and Religious Freedom.

The most of religious denominations have cancelled their public worship activities and they have broadcasted them, both in EU countries and USA. They have adapted their rites to pandemic. The Holy See set up a Vatican COVID-19 Commission indeed. Religious denominations have deployed a cooperative attitude with civil authorities. For some European religious groups such as the European Evangelical Alliance (EEA) and the Conference of European Churches (CEC), the civil measures that have halted large gatherings –including worship services- do not specially target the churches. So, they do not constitute a direct infringement of religious freedom. Quite rather, it has been considered as necessary for the common health. Safety precautions have also been followed in the religious ceremonies, in compliance with the World Health Organization Practical considerations and recommendations for religious leaders in the context of COVID-19, on 7th April.

This has not prevented them from showing their complaints about the limits eventually imposed on religious freedom. From this point of view, the two Presidencies of the Commission of the Bishops Conferences of the European Union (COMECE) and the Council of the Bishops’ Conferences of Europe (CCEE) also dwelt on the strong limitation imposed on freedom of religion in the context of the closure of places of worship, calling for the re-establishment of normal State-Church relations based on dialogue and respect for fundamental rights. They have claimed that the reopening of churches must be implemented in dialogue with ecclesial institutions. COMECE reiterates that religion is not a merely private issue; it also has a public and collective dimension. The aggressive approach of certain secularist actors against the role of religion in the public square may have contributed to its marginalization in the context of the current crisis. Moreover, they regret that the Roadmap lacked any explicit mention of religious services, as it neglects the key role of religion in European societies. There have been other denominations, from the Evangelical side, that have also agreed on these words. It has been the case—for instance—of the Portuguese Council of Christian Churches, or the ensemble of the Christian Churches in Austria.

For his part, Card. Sarah, from the Holy See, has signed a letter on 12th September in which he assets that Bishops have “to ensure that the participation of the faithful in the celebration of the Eucharist is not reduced by public authorities to a ‘gathering’, and is not considered comparable or even subordinate to forms of recreational activities”.

On the other hand, Jewish communities have had other worries [1]. As far as they are concerned, it has been disturbing the raise of hate speech, racism, stereotyping of minorities, and misinformation. They have been alarmed by the spreading of blaming the creation and propagation of the virus on the Jews. For their part, Muslim communities have delivered guidances and advices for entities and Muslim believers for them to arrange to rules in force [2]. Then, in some countries, such as the UK, they have also regretted that they have been blamed for coronavirus outbreaks. The European Union Agency for Fundamental Rights has confirmed the increasing attacks to minorities because of these reasons [3].

It is possible to assert that religious denominations have generally behaved in accordance to civil authorities. It is also true that there have been some protests related to the curtailment of the religious freedom at some time. Nevertheless, these situations have usually not reached the courts in European countries. It is also interesting to underline that there isn’t case-Law in EU Courts or in the European Court on Human Rights in relation to religious freedom and COVID. Regarding the Strasbourg court (ECHR), there have been lawsuits about close issues –such as family life in the decision D.C. v. Italy, 19th May- or about difficulties for extradition of people based on health reasons (decision Hafeez v. U.K, 24th March), but not regarding religious freedom.

Unlike this European framework, the banning of religious gatherings has raised more often litigation in U.S. courts, even the Supreme Court. This one has rejected that State restrictions on places of worship violated the First Amendment’s guarantee of religious freedom in lawsuits such as Calvary Chapel Dayton Valley v. Sisolak (on 24th July) or South Bay United Pentecostal Church v. Newsom (on 29th May).

[2] Vid. Comisión Islámica de España, in http://comisionislamicadeespana.org/recomendaciones-generales-ante-el-nuevo-coronavirus, or from the Muslim Council of Britain, in https://mcb.org.uk/resources/coronavirus/

Our “Kairos” Moment: The G20 and the Challenge of Immunizing the World