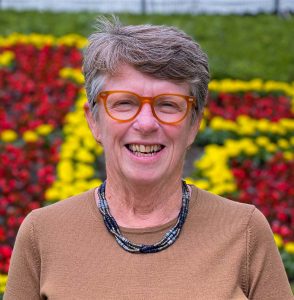 Dr Sr Maryanne Loughry is a Sister of Mercy and has been associated with Jesuit Refugee Service Australia since 1986. She is a visiting research scholar at the Center for Human Rights and International Justice, Boston College, and a research associate at the Refugee Studies Centre, University of Oxford. The following is an edited summary of her remarks at the July 2022 Windsor Dialogue conference.

The 2022 AMAR Windsor Dialogue focused on the link between music, mental health, and the preservation of culture and religion. This topic had evolved from earlier dialogues addressing the persecution of the Yazidis, with a particular focus on religious persecution.

To date there has been very limited scholarship on displacement, mental health, and religious persecution, and very little has been written about the support affected populations find in spiritual and religious practices. Less still is written about the role music might play in assisting affected populations’ mental health after the experiences of persecution, conflict, and displacement.

In fact, the challenge of identifying how to assist displaced people to flourish in settings that are shaped by insecurity and uncertainty has vexed scholars and humanitarian workers for decades. In particular, an important challenge has been hearing from the affected people themselves and listening to what works for them and what makes sense in their own cultures and settings.

A further challenge has been how to get the issues of displaced persons’ health, mental health, identity, and spirituality onto the political agenda of the United Nations, the European Union, and other funders and key players.

Development of IASC Guidelines on Mental Health and Psychosocial Support

In recent decades, commencing with the Psychosocial Working Group (PWG), an initiative led by the Refugee Studies Centre at the University of Oxford, and Queen Margaret University, Edinburgh, humanitarian workers and researchers came together in the hope of developing a framework of understanding regarding the psychosocial needs of refugees and displaced persons and how best to address these in humanitarian work.

Why was this necessary? At the time, tension existed between mental health experts and psychosocial workers regarding what was the impact of conflict and displacement on populations and how to describe and address this impact. In the 1990s and early 2000s, when PWG was conducting studies and engaging with key humanitarian agencies and funders, events such as the Balkan war, the first fall of the Taliban in Afghanistan, civil war in Sierra Leone, and the kidnaping of children in Northern Uganda by the Lord’s Resistance Army were shaping the international humanitarian agenda.

While the PWG was working on its agenda, in 1991 United Nations General Assembly Resolution 46/182 created the Inter-Agency Standing Committee (IASC), the longest-standing and highest-level humanitarian coordination forum of the United Nations system. This was significant because this committee brought together the executive heads of 18 key international organizations to formulate policy, set strategic priorities, and mobilize resources in response to humanitarian crises.

Building on the early work of the PWG and others, in the early 2000s the IASC set as one of its priorities the establishment of a set of guidelines on mental health and psychosocial support (MHPSS) in emergencies. Led by WHO, key humanitarian workers, and scholars, consensus was reached on underlying core principles and a framework for best understanding and addressing the mental health and psychosocial needs of affected populations in emergencies. Of great significance was the recognition that it was not either a mental health framework or a psychosocial framework that was best to employ but both.

In 2007 the IASC Guidelines on Mental Health and Psychosocial Support in Emergency Settings (IASC MHPSS 2007 Guidelines) were adopted, and in 2022 they still stand. Over the past years they have been translated, evaluated, and accompanied by supporting documentation. Key to these guidelines is a set of core principles, and one core principle particularly relevant to the 2022 AMAR Windsor Dialogue is the principle of “multi-layered support.” This principle recognizes that in emergencies people are affected in different ways and require different kinds of support.

The guidelines build on this core principle by stating that “a key to organizing mental health and psychosocial support is to develop a layered system of complementary support that meets the needs of different groups.” This has been captured in the pyramid illustration below, which has come to symbolize the MHPSS guidelines. It is recommended that all layers of this pyramid are important and ideally will be implemented concurrently.

Why is multi-layered support particularly relevant to the AMAR Windsor Dialogue? AMAR has been considering the causes of and responses to forced migration and religious persecution with particular respect to the Yazidi people, whom AMAR has been assisting in Kurdistan since 2014. The 2022 AMAR Windsor Dialogue focused on the link between music, mental health, and the preservation of culture and religion. At present no international guideline on mental health and psychosocial support will recognize music alone as a response to the mental health needs of displaced persons. What is more helpful, especially when engaging with key international organizations such as the World Health Organization (WHO) and United Nations High Commissioner for Refugees (UNHCR), is to situate and highlight music and other cultural practices within existing frameworks. To do so is to promote a neglected topic in a manner that it can be recognized and possibly even amplified to the significance it deserves.

Recognition and adherence to these IASC guidelines and their core principles has particular significance when approaching the United Nations and the European Union on any matter relating to the mental health of displaced persons. After many decades of disagreement, the present MHPSS guidelines are a unified platform enunciating agreed principles and practice. These guidelines and their accompanying documentation will continue to evolve. The insights of the AMAR Windsor Dialogues are now well positioned to also inform the guidelines. There is a special place for music and religious practices when providing multi-layered support to affected populations in emergencies, and acknowledgement and recognition of the role music and religious practices play will strengthen people’s mental health, ensuring they can flourish in a manner that is culturally appropriate.

Possibly the next challenge for the AMAR Windsor Dialogue is to determine how best to bring the knowledge and insights gleaned from engagement with the Yazidis and other people persecuted for their religious beliefs to the attention of the relevant international agencies in a manner that ensures they can hear and recognize the value music and other cultural practice plays in strengthening mental health. As discussed in the July 2022 dialogue, this could entail research to collect data as well as partnership with like-minded organizations who also understand the role of music and religion in mental health.

Impact of Music Participation on the Psychological Wellbeing of Refugees