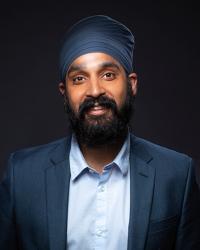 Simran Jeet Singh is Executive Director of the Aspen Institute’s Religion & Society Program. The following is an edited summary of his remarks presented at the ICLRS 2022 Religious Freedom Annual Review, 16 June 2022.

My story begins in Texas. I’m not sure why my parents thought it would be good to leave their comfortable homes in India and emigrate to South Texas, but they did. And that is where my three brothers and I were born—brown-skinned, turban-wearing, beard-loving boys. We faced our share of challenges because of our visible religious identity. I am not saying life was terrible; we had wonderful, happy, normal childhoods. But part of our upbringing was dealing with racism on a daily basis because of how we looked and our religious identity. And those experiences shaped my commitment to the work of religious freedom.

What does religious freedom mean to me? For me, it is very personal and I have gathered three touchpoints that I want to share with you. They are not my only personal experiences related to religious freedom, but they were formative for my concern and understanding of the issue, and they can inform how we move forward.

My first memory of being denied rights because of how I looked is from when I was about 10 years old. My brothers and I went to a roller-skating rink with friends for a class party. It was the same rink we had gone to often. The manager must have been new because when we arrived, he immediately came over and said in a pretty angry tone, “Get out of here with those damn rags on your heads.” We had, even at that young age, experienced our share of such moments. We knew our mom, who was with us, would do the dirty work, so the four of us walked away. But after five minutes, it had not been resolved, which was unusual. We were anxious to join our friends, and so I walked over to my mom and saw that she was crying.

I had never seen her cry before. I did not know what to do. I started crying too. She put her arm around me and asked, “What’s wrong? Why are you crying?”

I said, “It’s not fair. They should let us skate.”

For a moment, I thought my mom had no idea what was happening, so I asked, “What do you mean?”

She answered, “I shared with the teachers and parents what is happening, and they’ve all agreed to walk out together. Aren’t we lucky to have such good friends?”

There were many lessons learned that day. One, the importance of sharing your experiences with others, and giving them the chance to care. Two, the power of community. Three, understanding your own commitments and principles and sticking by them. But the one I want to emphasize is what we might call solidarity. It was the feeling I remember having at that moment, for the first time in my life: people who were around me, my friends, cared enough about me to give up something they wanted to stand up for my rights. Remembering that these people have my back made me want to do the same for other people when this happens to them.

The next major touchpoint was when I was a senior in high school. We began hearing rumors during class that there was a terrorist attack in New York City. Some of my friends and I ran over to my history teacher’s room and watched on TV as the Twin Towers collapsed. For a while, nobody said anything, dumbfounded. We could not really comprehend what was happening. Then it was reported that they had a suspect. They named Osama bin Laden and flashed his image on the screen. My heart dropped because I saw a turban, brown skin, and a beard just like mine.

Among my group of friends, I did not have concerns. I knew that they knew me. But I had experienced enough to know that most Americans would not know or trust me, and that my life was about to change. And it did. There were many changes, swift and difficult—the racist backlash. Essentially, we went home, locked the doors, and the death threats immediately began. It was challenging. During the day, we would watch TV and try to understand what had happened to our country. In the evenings, we would get on a national conference call with the Sikh community all over the country. Local leaders would report who had been attacked and how they were doing and then move on to strategy: what should we do?

The immediate impulse was to tell people that we are not Muslims; that will save us, and we will be safer. The community conversation was formative for me. I learned through that conversation that, though it might be easier to educate people about who we are—“We’re not Muslim, we’re Sikh. Let us educate you about us.”—that approach would not be consistent with our ethics. What we would really be saying is, “Don’t attack us. Go get them, the bad guys.” Our faith teaches that no one should be attacked for how they look or what they believe. At home, the conversation with our parents was also tough because they could have created more safety for our family by taking this approach. As a father now, I better understand how difficult that conversation was for my parents.

This was the decision point for our community. We might be safer in the moment, but in the long term, deflecting hate is never the answer. You’re not addressing the issue, and you’re making life worse for other people. It’s not the right thing to do, either ethically or strategically.

There is an example from our tradition that was raised at that time and has guided me in my vision for religious pluralism. In the late 1500s and early 1600s in South Asia, as the Sikh community was coming forward, there was intense religious persecution from the state against minoritized communities. The Kashmiri Brahmins, a Hindu group who were essentially the majority in South Asia, were being persecuted by those in power, who were in the minority, and they could not find a solution. Eventually, they came to the Sikh Guru Tegh Bahadur and said, “We know you are of a different faith. We know you disagree with how we live and practice, but you believe that everyone should have the right to live this way.” And Guru Tegh Bahadur responded, “Yes, that is right, and I am willing to stand up for you.” And he did. He went to Delhi and was arrested, imprisoned, and executed for his belief that all people should have the right to live and practice as they choose.

For many years, this felt like another level for me. I would never be able to reach a similar station of spiritual enlightenment. But it is important for us to recognize that there are examples in our world today where people have stood up and even given their lives for their principles. Heather Heyer, for example, was killed in Charlottesville while standing up to white supremacists.

The last touchpoint I will mention arose more recently and helped me see more clearly what religious freedom means for us and our kids. These are small moments in comparison to the human rights violations and persecution that people face all over the world, including in the United States, but they can be flashpoints.

I was walking through airport security with my girls before the pandemic. If you walk through airport security wearing a turban, TSA’s approach is to subject you to additional screening—effectively racial profiling. Over the years, although the practice is annoying and wrong, I had learned to deal with it. But what happened this particular day was different. My three-year-old daughter and I were walking through security.

The TSA agent said, “Your daughter needs to go back while we check you.”

My daughter asked, “Why are they taking you? Did you do something wrong?”

For the first time I realized what our government was doing to me would affect my relationship with my daughter. It was heartbreaking. I could not sleep for the entire plane ride that night, just thinking about what it means to live in a society where our children are getting the message that they should be ashamed of who they are, ashamed of their parents. I know that’s the message because I felt the same way when I was a child.

Why care about this work? Yes, it is about justice, about living with integrity and living by our values, which I think creates more happiness in our lives. It helps us feel whole and have meaning. All of that is true. But think about the people we care about: future generations, current generations, loved ones, our elders. This vision for justice and liberty for all is not our reality today. There are some ways in which it is improving, some ways in which it is not. But the commitment for all of us is to look at our closest relationships and the people we care about, and to then ask the question, “What does a good life look like? And what does it take for us to get there?” That is where this principle of religious freedom matters to me.