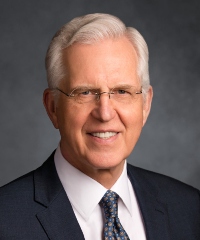 Elder D. Todd Christofferson is a Member of the Quorum of the Twelve Apostles of The Church of Jesus Christ of Latter-day Saints.

I am grateful for this opportunity to address you. I’m honored to be here among so many who work so hard to build better societies, to lift people out of poverty and desperation, and to protect fundamental human rights. We are all seeking for a more just and free society where every person is valued and where each has a fair opportunity to flourish. Thank you for all you do in the service of that noble end.

I speak to you today as an apostle of the Lord Jesus Christ. In doing so, I affirm the eternal human dignity of each person as a beloved child of God. I affirm that each one of us has a divine nature and destiny. We are not merely cosmic accidents in a cold and uncaring universe. We are known and loved by an all-knowing and all-loving God.

And so it is with great concern that I speak to you about a troubling trend in the law. As the law continues to develop, including through constitutional revisions, religious liberty is not receiving the legal recognition and protection it deserves as a fundamental human right. Instead, it is being reduced to the narrower notion of “conscience” and afforded few protections. Worse yet, according to the Pew Research Center, government restrictions on religion around the world have been climbing since Pew began tracking these trends in 2007. Recently, these restrictions reached a new record high [1]. In the most recent Religious Freedom Report issued by “Aid to the Church in Need,” the report noted “a marked increase in the number of countries with significant religious freedom violations, where the situation has clearly worsened,” concluding that “[t]his represented a marked deterioration” and “a general pattern” showing “an increasing threat to religious liberty from state actors” [2]. 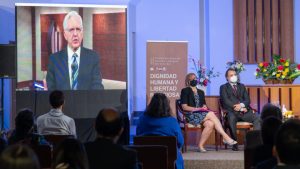 Failing to give sufficient protections to religious freedom is a grave mistake with fateful consequences not only for people of faith and their faith communities but also for the freedom and dignity of everyone, including those of no religious faith. Religious liberty protects not just believers but everyone. It is the taproot that sustains and nourishes many other fundamental freedoms, values, and social goods. Without strong protections for religious liberty, much of what we treasure about our democratic societies, including human rights and human dignity, will begin to wither and die, like flowers cut from their roots. The fate of many cherished freedoms and of liberal democracy itself turns on the strength of religious freedom.

And so, I’ve entitled my address, “Religious Liberty: The Basis of a Free and Just Society.” I will focus my remarks on six reasons that religious freedom should be strongly protected in the constitutions, laws, regulations, and practices of every society.

Why Religious Freedom Should Be Strongly Protected

First: Religious liberty is the oldest and most deeply rooted freedom in international human rights law and is essential to the entire structure of human rights. It is widely recognized that religious freedom is the “grandparent” of all human rights—recognized first in international treaties dating back to the Peace of Augsburg in 1555, which established that the religion of a realm would be determined by the ruler of the realm and not by outside forces. This principle gradually led to the protection of religious minorities, and ultimately to the protection of religious freedom as a fundamental individual human right.

This essential right finds its mature expression in Article 18 of the Universal Declaration of Human Rights: “Everyone has the right to freedom of thought, conscience and religion; … and freedom, either alone or in community with others and in public or private, to manifest his religion or belief in teaching, practice, worship and observance.”

Second: Religious liberty is essential for protecting human dignity. For millions of believers from diverse religious backgrounds, religion is not a hobby, pastime, or social club. It is, rather, the foundation of our lives and the very center of our identities. Our religious identities constitute who we are and how we understand the purpose of life, the meaning of death, and our hope for what lies beyond this mortal sojourn.

Religion is central to the familial and community traditions and practices that sustain and give meaning to our lives, from birth to death. The naming and blessing of children, coming-of-age ceremonies, sabbath worship and daily prayers, marriage rituals, burial rites—these and many other religious practices are the rhythm of our lives. Our religious institutions are places of belonging where we gather in the company and strength of fellow believers. Houses of worship where we commune with God, religious schools and colleges where we teach our children, and religious charities where we serve the poor—are all essential to our faith communities. (And these religious institutions need to be able to decide for themselves what religious leaders will lead the communities and teach the faith to the rising generation.)

The state’s failure to provide legal protection for these and many other fundamental aspects of religious life imposes grave harm on its religious citizens. No liberal democracy can be free and respect the human dignity of all its citizens if it fails to protect and accommodate the right freely to practice one’s religion.

Third: Religious liberty promotes pluralism and peace. For centuries, people fought over religious differences, often with the government suppressing one religion in the name of another. Religious liberty has allowed people of diverse religious traditions to live together in peace and friendship despite profound disagreements. At this very gathering, representatives from faith traditions with enduring differences associate in a spirit of respect, unity, and friendship. The history of religious freedom demonstrates that respect begets respect. Governments that protect religious freedom have fewer social conflicts and greater levels of social cohesion.

Respect for religious liberty infuses society with an ethos of respect for different opinions and ways of life. People know how to live peacefully and respectfully despite religious differences are more likely to live peacefully and respectfully despite other differences, including different secular beliefs about marriage, family, gender, and sexuality. Religious liberty is the basis for a more inclusive, tolerant, and peaceful nation.

Fourth: Religious liberty facilitates a proper separation of church and state that avoids any justification for secular hostility toward religion. In a liberal democracy, the powers of the state should not be exercised directly or dominated by one religion at the expense of the rights and freedoms of others. Conversely, government should not interfere with the internal religious affairs of religious organizations. Nor should religious people be denied the right of all citizens to express their opinions and support policies that advance the good of the nation as they understand it.

In this balancing, lawmakers should strive not for an aggressive secularism that expels religious beliefs from the democratic conversation or marginalizes the role of religion in society. They should instead seek an inclusive, religion-friendly “secularity,” based on equal respect for religious and nonreligious persons and viewpoints, where no one religion or ideology officially dominates the state. A generous, inclusive religious liberty is far more likely to lead to an enduring pluralism than a rigid, ideological secularism that oppresses religion and religious believers.

Fifth: Religious liberty allows diverse faith communities to continue providing critical services to society and its most disadvantaged members. Motivated by their faith, religious people and religious organizations feed and clothe the poor, shelter the homeless, protect and comfort the abused, care for the sick and disabled, find homes for orphaned and abandoned children, strengthen families in distress, educate children, and perform numerous other vital social services. Religious people and institutions are not alone in these endeavors, of course, but their contributions are essential to the lives of millions of people across Latin America.

These acts of kindness and charity are an integral part of our faith. In the Christian tradition, the ancient Apostle James wrote that “pure religion” is “[t]o visit the fatherless and widows in their affliction” (James 1:27).  It is much the same with other faith traditions. Our service to others flows out of our love for God and our fellow man. Religious liberty allows us to serve in ways that are consistent with the faith that motivated us to serve in the first place. Without freedom of religion, many could not serve as they do.

Sixth and finally: Religious liberty enables all of us—whether religious or not—freely to pursue truth and the meaning of life, and to live accordingly. At the heart of religious liberty is the reality that faith in God cannot be coerced. Each of us must be free to find and accept faith—and even to reject it—in our own time and on our own terms. The same is true of belief in secular ideologies. Religious liberty is a powerful bar against state imposition of beliefs about God and about anything else. With its long and powerful heritage in the law, religious liberty creates a fortress of sacred freedom so the mind and heart can freely explore and embrace truth and determine how to live it. Wherever our seeking for truth ultimately leads, I urge all of us to strongly protect the freedom that makes the quest possible.

In summary, religious liberty has been rightly called our first freedom. It gave birth to, and is interconnected with, numerous other essential human rights. We must never forget that a state with power to deny our first freedom will inevitably have power to abridge many other freedoms. Because faith is so deeply tied to human identity, religious liberty must be an essential part of any regime that claims to respect human dignity. Indeed, religious liberty is a fundamental pillar in any constitutional order that values each person, thereby fostering a pluralism that gives everyone a place of belonging and security within our diverse societies. It also allows faith communities to serve society in a way that is true to and thus empowered by their faith. And it preserves a sacred space for individuals to pursue truth and the meaning of life.

Finally, the practice of religious freedom—by governments, societies, and individuals—is a tutorial in how to respect, protect, and even love others despite our differences. Yet in that tutorial, we come to understand that we share a deeper, common humanity—a piece of divinity, I believe, that ultimately unites us as brothers and sisters—as family. I urge all of us, especially the policymakers among us, to do everything possible to respect and vigorously protect not only conscience but the full scope of religious liberty as a fundamental human right for the good of our societies.

© 2021 by Intellectual Reserve, Inc. Used with permission. Do not copy or distribute.

[1] Samirah Majumdar, Government Restrictions on Religion Around the World Reached New Record in 2018, Pew Research Ctr. (10 November 2020) (“Restrictions by governments include official laws and actions that curtail religious beliefs and practices, while social hostilities encompass everything from religion-related armed conflict to harassment over clothing. The analysis covers policies that were in place and events that occurred in 198 countries and territories in 2018, the most recent year for which data was available.”).