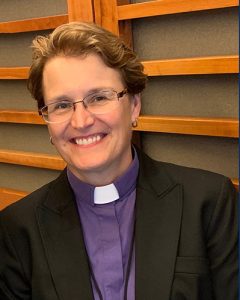 Reverend Marian Edmonds-Allen is Executive Director of Parity, a nonprofit that works at the intersection of faith and LGBTQ+ concerns. The following is an edited summary of her remarks presented at the ICLRS 2022 Religious Freedom Annual Review, 16 June 2022.

Religious freedom is our best hope for our country and for our world. At a time when divisions threaten to rend the very fabric of society, when seemingly intractable disagreements split communities and even families, it is religious freedom that is our very best hope.

That may seem like a strong statement, but I have a perhaps unusual perspective on religious freedom. I am a walking embodiment of our current divisions. You see, I am a person who scares people: I am a genderqueer, bisexual person and an ordained Christian pastor. I would guess that there is something about that statement that is surprising, if not a little bit scary, to people. In fact, when I introduce myself in faith contexts as LGBT, I can watch the body language in the room and see a reaction. And when I am speaking to LGBT groups and not wearing a clerical collar but “out” myself as clergy, I can, once again, watch people recoil. I am not offended. I understand the reaction because that used to be my reaction too.

My Path to Understanding Both LGBT and Religious Communities

I was 40 years old before I met my first out LGBT person, and I will admit to you that I felt some revulsion myself. But I was in theological school, learning to be a pastor, so it was important to me to be comfortable to minister with all people, no exceptions.

You can guess my ugly duckling story: after a while I realized that was me too—that I was LGBT.

But as a new pastor and a lifelong follower of Jesus, this was a crisis for me spiritually and personally. It took a lot of study, prayer, worship, and wrestling with God before I started to feel comfortable in my own skin. And it then took years before I realized that my being LGBT made me a better Christian and a better pastor. For a time I thought God hated me; why else would God have done “this” to me? But then I realized God did not hate me. God loved me then; God loves me now. People often ask me why I stayed Christian. My answer is always the same: through it all, God never let go of me. And being a follower of Jesus is too much a part of me to ever let go of God.

Here is one reason why: I was recruited to Utah in 2011 to pastor in Salt Lake City, and right away I realized I needed to work on LGBT youth homelessness and suicide prevention. Soon after, I was hired as the executive director of an LGBT youth center in Ogden called OUTreach. At the youth center I quickly realized that every single LGBT youth there knew someone who had died by suicide. One young person had known 19 who had died. And many young people there had already attempted suicide themselves. I also learned that of the 700 youth who came to the center, one-third were homeless, some as young as 12 years old. They slept out in camps and railroad cars; one found a safe spot in a tree near Temple Square. In the canyon above Salt Lake, near a homeless youth camp, a place was named “suicide rock.”

Working with, Not Against, Others

I did everything I could to help them—public events, protests—but I was not making any headway. That is, until I started working with, and stopped working against, people whom I had blamed for the dire circumstances of LGBT youth: religious people and institutions.

That did not happen until I met Laura, a loving, active, member of The Church of Jesus Christ of Latter-day Saints and a legislative aide in Utah. Laura had not met LGBT people before, but she cared about everyone, young people especially, and she knew that no child should be homeless or at risk of suicide. She and I became collaborators in changing laws in Utah so that LGBT youth could be safer and sheltered. Laura did all of this for one simple reason: as an expression of her faith. Laura and I are dear friends still, yet we do not agree on much. We have different political views and theology, but Laura’s freedom to live her faith—her religious freedom—saved countless lives, then and now.

Religious freedom is the key.

For many LGBT people, the phrase “religious freedom” is simply code that is used as cover by people who want to take their very lives away. For some, the threat is that palpable: religious freedom is seen as code for a movement that wants to deny the very existence of LGBT people and to impose a white nationalist Christianity as the political and societal framework in the United States and world.

On the religious freedom side, some believe that the “LGBT agenda” is to outlaw religion in the United States and beyond and to remove the ability and access to worship God. Many in the religious freedom movement see the LGBT agenda as wanting to impose an LGBT world order that would take away life as they know and cherish it, redefine gender and family, and destroy the moral fabric of the United States and world.

It is easy to imagine that these two movements will not rest until the other is destroyed; after all, it is a matter of survival for each one.

But there is a way forward that will not preference one over the other and will allow each to have the freedom to be who they are, to have not only respect but also surprising allies who care for and about them. And it is through religious freedom itself—religious freedom practiced through and under the rubric of covenantal pluralism.

Covenantal Pluralism: Mutual Respect Without the Need to Agree

Covenantal pluralism, simply stated, is mutual respect and standing up for one another, without the need to agree on anything except that human beings are worthy of respect and self-determination, as long as they do not harm someone else.

It is as simple as helping a friend with a flat tire if that friend has a different faith or political opinion; that is covenantal pluralism. It can also be as complicated as coalitions working across difference toward a common goal, without requiring the other to agree with each other’s convictions or beliefs. This is an old idea, originated by Rabbi Irving Greenberg in the 1960s and reinvented more recently by the Templeton Foundation and their scholars in beautiful and exciting new ways.

Covenantal pluralism does not require religious belief. What it requires is integrity and sincerity of conviction, and so covenantal pluralism includes those with deep orthodox religious faith and those who disavow religion entirely. It is, in short, for every human. And it is a way for every human to share their best self with others, to transform and be transformed. It is a way to share faith and ideas to better each other, and to better ourselves, while staying true to our deepest, core values.

Covenantal pluralism also allows for those disillusioned by religion to engage with it again—to partner together, to help one another, for the good of the whole. For example, think of millennials, who often run from institutions of every type, including religious ones. Covenantal pluralism attracts them to engage with institutions and with religion again—as people like me, like Laura—find each other to work together for the good of the world.

Another, exciting example of covenantal pluralism has been happening in the United States. I recently spent a month in Washington, D.C., bringing delegations of LGBT people and allies from all 50 states to meet with their U.S. senators and representatives: moms, LGBT advocates and equality leaders, clergy, young people, and families—from all walks of life and perspectives. These bipartisan and very diverse state groups came to the U.S. capital to advocate for both LGBT equality and religious freedom.

This is a truly bipartisan effort with support from the most conservative to the most liberal, from faith and religious organizations and LGBT equality organizations. Chief among them are my dear friends from The Church of Jesus Christ of Latter-day Saints. The reason why? It is Laura’s reason: they are living their faith. This is covenantal pluralism, in action.